Scroll down to see all 54 Loteria paintings in this installation

This installation comes from an appreciation for the beauty and heartfelt magic that only Mexico and its people can offer.

Every culture has its idioms and icons -certain words and images that transcend the literal and reside in the psyches of the people. This installation entitled “La Lotería: An Exploration of México” explores some of the ubiquitous images of Mexico by using the format of La Lotería, a popular Mexican game of chance. This artwork has drawn upon Mexican traditions, historical figures, gastronomy, and popular culture, translating them into images familiar and recognizable to those who have experienced this distinctive culture. The purpose of this installation is to inspire interest, understanding, and dialog between the people of the United States and Mexico.

I wanted to show people in the US how sophisticated and rich the culture of Mexico is, in a fun and interesting way by using the format of the much loved Mexican game of chance called “Lotería.” There are 54 cards in a Loteria deck -hence the total number of 54 small paintings in this installation. I wanted to paint images, impressions, and ideologies that would tell of my experiences of the Mexican culture in a fun and objective way.

Though I have been traveling, and living in Mexico off and on for over 20 years, this installation was conceived while I was living in San Miguel de Allende, Guanajuato, Mx. in 1995 – 1997. I spent 1 year in research on the historical and social importance of this game, and 1 year in production.

Many images within this installation depict icons of humor, irony, and faith found throughout Mexico which are concepts that are often employed to deal with the harsh realities of life. These concepts allow many people living in Mexico to maintain sanity in a context, that at times, seem controlled by the irrational.

Many Americans at the time, only knew of the stereotypical persona of someone from Mexico as a day-laborer, housekeeper, or child care provider, and I wanted to help change and broaden that perception. Fortunately, the NEA and the Arizona Commission on the Arts agreed to my proposal in 2000 and gave me a grant to research and fund this project in order to bring more awareness to the American people about our neighbors South o the border.

This work resulted in having an official ¨Nuevo Lotería¨ game published by Don Clemente Gallo, who also sponsored the tour of the artwork to various Museums and Cultural Centers in Mexico. The royalties I earned from Gallo, I donated to FAI Save the Children Foundation, Mexico. Then with the help of the AZ Commission on the Arts it toured in the US for approx. 10 years. If you are interested in exhibiting this work please feel free to contact me. Also I had the fortune to collaborate with the famous Latin-America writerIlan Stavans publishing a book titled “Loteria” by UA Press.

The images depicted in this installation run the gamut from the mundane to the obscure. Anyone who has crossed the border, ventured into the central highlands, or spent time on the beaches of Mexico will find some or most of these images familiar.

Each image was created independently without reference to the others. Despite this, certain themes may be discerned within the installation. Food, for example often has strong ties to national identity. When consumed, it often evokes memories of childhood and family ties. The food depicted within this installation is found throughout Mexico –including comfort food dishes like “No. 50 Pozole”a green or red chili based broth with hominy and pork along with lots of fresh garnishes of lettuce, limes, chili, oregano, radishes, onions, cilantro and tostadas to break up and put on top. “No. 19 Los Nopales” is a vegetarian dish of cactus pads, and the refreshing drink of rice milk and cinnamon “No. 17 Horchata” often served in plastic bags and a straw. Many street corner vendors offer sugary long donuts “No. 49 Los Churros”and flavors of guava and mango popsicles “No. 22 La Paleta” and children peddle gum extracted from the sap of the Sapodilla trees in the Yucatán Peninsula “No. 24 Chicle.”

On the surface, Mexico may appear to be a homogeneous society in regards to its Catholic beliefs. However, faith is practiced in a wide spectrum. This ranges from the traditional objects of devotion –Candles “No. 16 La Veladora”many are lit in churches or home altars to ask for help. Displayed in churches and cathedrals “No. 26 Ex-votos”are testaments to the saints who answered their prayers, typically painted on tin. You’ll see tiny medals of body parts, proclaiming and asking for miracles “No. 36 Los Milagros”and Hand Carved Saints with the colonial Spanish blue painted bodies “No. 11 La Santita Azul”to images of the wealthy pope with a gold tooth shown as a Day of the Dead sugar skull “No. 23 Dia de Muertos.” Magical powders for protection “No. 33 Polvo Magíco” and the ever-present diablito “No. 21 Lujeria“who provides continuous temptations in all forms of lust and money. These are all examples of the indigenous, colonial, and contemporary mix of beliefs found in Mexico.

The male figures in this installation embody many of the traits most admired in Mexican culture. We see the machismo of the street-corner fire eater “No. 5 El Tragafuegos” and the professional wrestler “No.7 El Luchador.” We see the quiet dignity of the unassuming humanitarian physician Dr. Jose Gregorio Hernandez “No. 3 El doctor” so widely revered throughout Latin America known to posthumously leave prescription notes by the bedside of the ill who prayed to him. Ironically the two most recognized men within this series are masked. Since Pre-Columbian times Mexico has been enamored with the mask. It serves as both a shield and a hiding place. The famous good-guy luchador who gave his winnings to orphanages “No.9 El Santo” and the popular spokesperson for the Zapatista movement, Subcomandante Marcos “No. 39 El Revolucionario” each represent a masked champion whose silent face embodies the face of millions.

The female figures of this series also represent strong individuals whose actions have had an impact on many, even if their voices were heard by only a few. “No.12 La Corona”refers to the pious nuns whose portraits were painted for posterity before entering the cloistered 17th century convents to never be seen again after taking their vows to God. A paper mache doll with a name on it “No.51 La Muñeca”was used by prostitutes who would indicate their availability by displaying them in the windows of brothels. We see the revolutionary Doña Josefa Ortiz de Domínguez “No. 52 La Corregidora” whose whispers helped free Mexico from Spain, and the Virgin of Guadalupe who spoke only to Juan Diego and became the crucial link between European Catholic and indigenous spirituality. No other woman’s image is as widespread as this Virgin’s, whose depictions run from the divine to the sublime, from high art to kitsch as in “No. 47 La Virgen Fosforescente.”

Mexico offers a broad spectrum of popular and high culture, from the fashionable modern soap opera “No. 54 La Telenovela”and the graphic novels of “No. 18 La Historietas” to the famed poet Sor Juana Inés de la Cruz “No.32 La Poetisa.” How poignant to realize that Sor Juana’s works were deemed scandalous and she was ostracized in her own lifetime, yet her face now graces the Mexican currency used to purchase the necessities of life -a perfect example of how sometimes irony and humor are often unintentionally juxtaposed in a culture. This installation embodies only a portion of the diversity of Mexico, and its aim is to give viewers from America and other cultures a sense of the richness Mexico offers to the world at large. We all share similar beliefs –including desire “No. 2 Desear”liberty “No. 38 La Libertad” and a sense of destiny “No. 40 El Destino.” Although this installation is only a small attempt to express the unique culture of Mexico from an outsider artist like me, may passion serve as apology for imperfection.

“Lotería: An Exploration of Mexico” understanding the culture of Mexico in the format of the traditional Mexican board game “La Lotería.” A series of 54 paintings each representing themes of food, social, historical, and pop-cultural imagery from the culture of Mexico, experienced by American artist Teresa Villegas. The original artwork of this installation is available for purchase and exhibition contact artist here.

Limited edition prints from this collection are available for sale on Etsy.com

Lotería is a traditional game of chance, similar to bingo, but using images on a deck of cards instead of numbered ping pong balls. Every image has a name and an assigned number, but the number is usually ignored. Each player has at least one tabla, a board with a randomly created 4 x 4 grid of pictures with their corresponding name and number. Players choose a tabla to play with, from a variety of previously created tablas, each with a different selection of images.

Lotería is the Spanish word for lottery. The deck is composed with a set of 54 different cards with a picture on it. To start, the caller (cantor, or singer) shuffles the deck. One by one, the caller picks a card from the deck and announces it to the players by its name, sometimes using a verse before reading the card name. Each player locates the matching pictogram of the card just announced on their board and marks it off with a chip or other kind of marker. In Mexico, it is traditional to use small rocks, crown corks or pinto beans as markers. The winner is the first player that shouts '¡Buena!' right after completing a tabla or a previous agreed pattern: row, column, diagonal or a pozo.

Lotería de Pozo is a variant version of the traditional Mexican Lotería, where the basic rules apply. For this version, before the game begins, players agree on how many pozos are to be completed in a row, column or diagonal pattern. A Pozo is a group of images in a square. The square may contain 2 x 2 (4) or 3 x 3 (9) images[2] for a traditional tabla.

Loteria online game[3] is a game to allow computer users to play an online a version of the Lotería Mexicana. It was created in 1996.[3]

The origin of lotería can be traced far back in history. The game originated in Italy in the 15th century and was brought to New Spain (modern Mexico) in 1769. In the beginning, lotería was a hobby of the upper classes,[1] but eventually it became a tradition at Mexican fairs.

Don Clemente Jacques began publishing the game in 1887.[1] The current images have become iconic in Mexican culture, as well as gaining popularity in the US and some European countries. Other popular Lotería sets are Lotería Leo, Gacela and Lotería de mi tierra.

During the 1930s, the Catholic church came up with their own version of la Lotería. It consisted of Catholic images instead of the traditional images used in the original game. The Catholic church did this to promote their beliefs by making their very own game board similar to the Lotería.[1]

Catrina in Chapala, Jalisco with dress of lotería cards

The following is a list of the original 54 lotería cards, traditionally and broadly recognized in Mexico. Below each card name and number, are the verses (in Spanish) sometimes used to tell the players which card was drawn. However, there are several less traditional sets of cards, depicting different objects or animals. 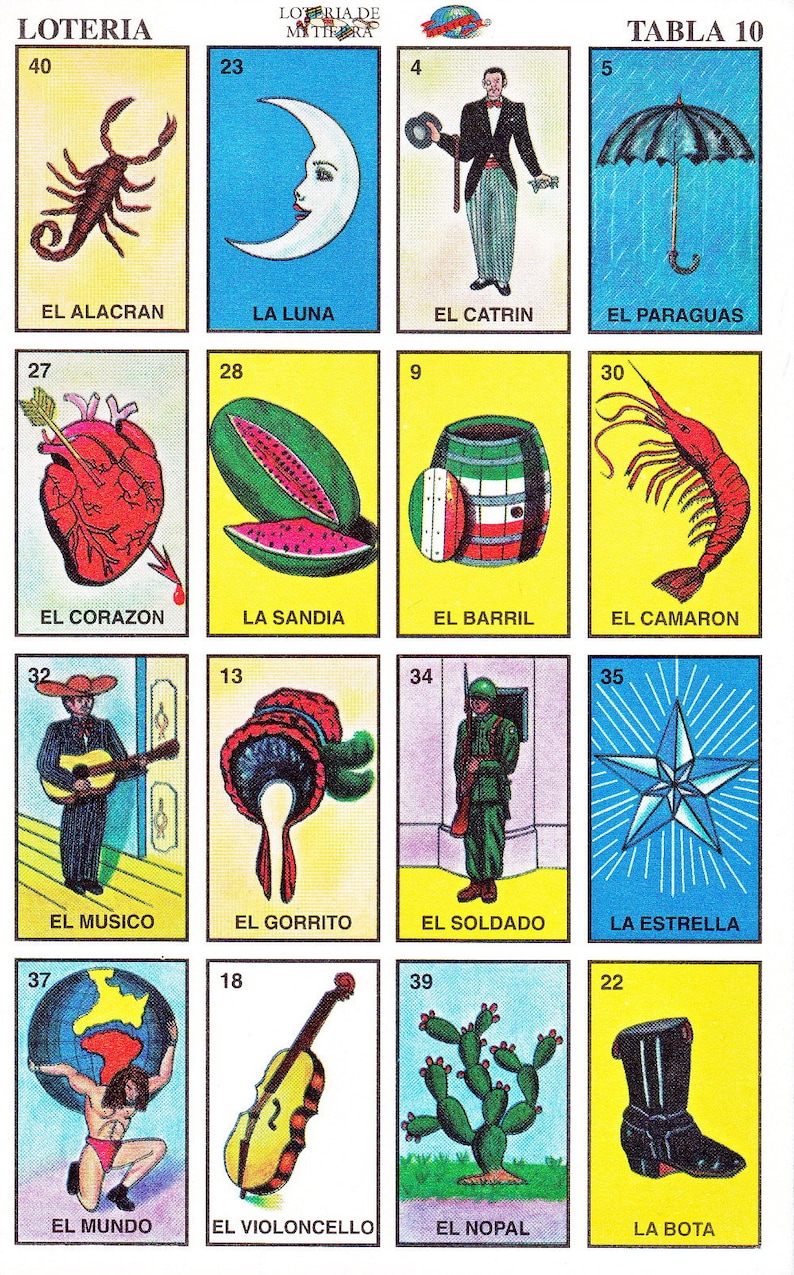